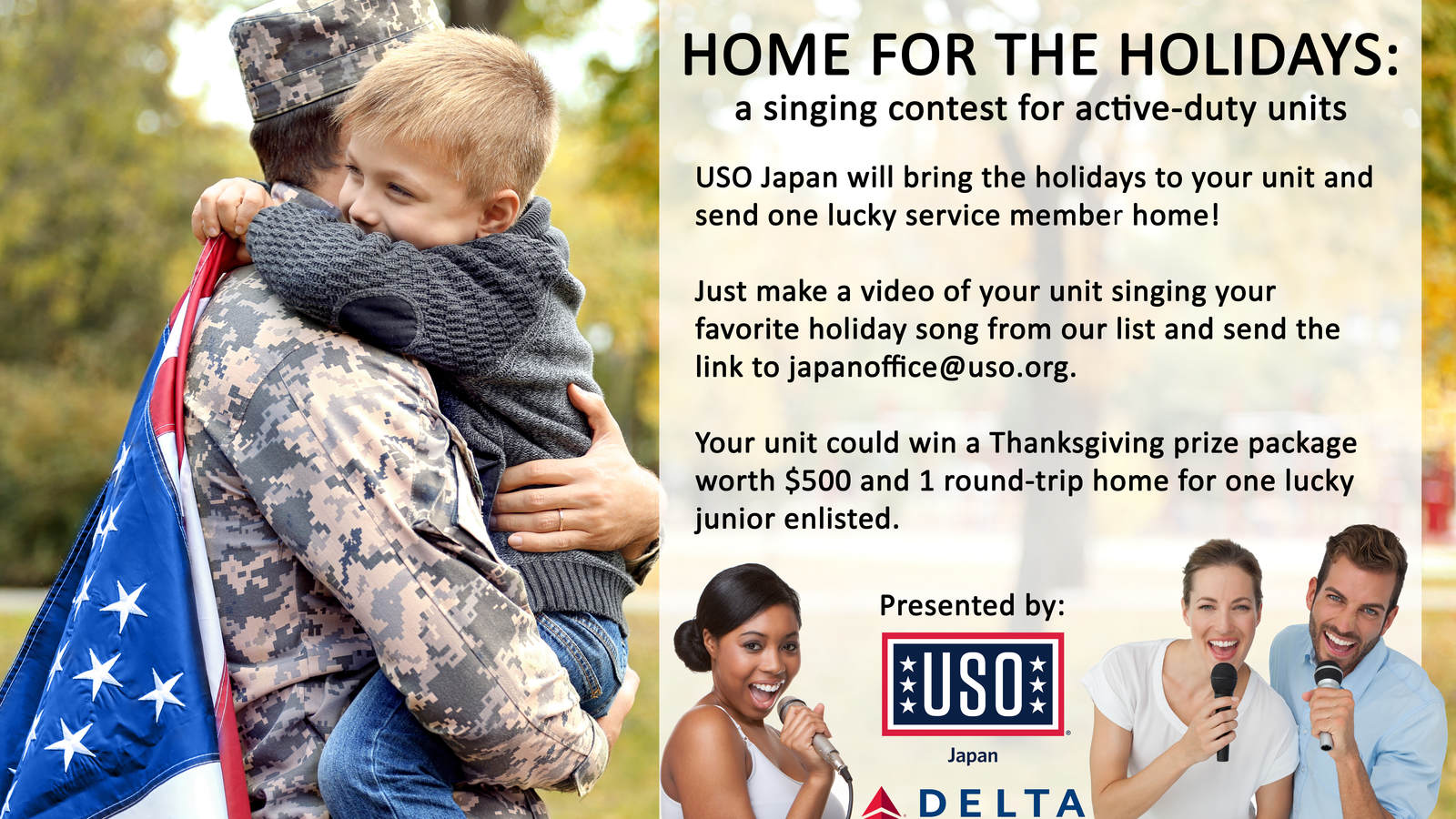 NO PURCHASE OR DONATION NECESSARY.  Enter for a chance to bring the holidays to your unit! Six (6) active duty U.S. military units (defined as a company, squadron, or division of 500 people or less) stationed on mainland Japan will each win a prize package of food for a holiday party, and one (1) junior enlisted service member (rank of E-4 or below) from each winning unit will win a round-trip Delta Airlines ticket to the continental United States from mainland Japan, courtesy of Delta Airlines. Contest is open to active duty U.S. military units stationed on mainland Japan and comprised of active duty service members who are age 18 or older at time of entry. One (1) entry per unit. See Official Rules for entry deadline and prize details.

ELIGIBILITY: Active duty United States military units (defined as a company, squadron, or division of 500 people or less) stationed on mainland Japan and comprised of active duty service members who are age 18 or older at time of entry can enter to win one (1) of six (6) prize packages of food for a holiday party, and one (1) junior enlisted service member (rank of E-4 or below) from each winning unit will win a round-trip ticket to the continental United States from mainland Japan, courtesy of Delta Airlines. Employees of the United Service Organizations, Inc. (“USO,” the “Sponsor,” and the “Administrator”), and its affiliates, advertising and promotion agencies, retailers, and distributors (collectively, “Contest Entities”), and their immediate family members and/or those living within the same household of each are not eligible to enter or win. Contest is subject to all applicable federal, state, and local laws and regulations. Void where prohibited by law.

HOW TO ENTER: To enter the Contest, email a YouTube or Vimeo link to a video of your unit singing its favorite holiday song (from the list of songs below) to USO Japan at japanoffice@uso.org. The video must be 8 minutes or less in length, may only feature the people within your unit, and cannot include any background music, unless members of your unit are playing the instruments to create the music. One (1) entry per unit. To qualify for the Contest, entries must be submitted within the Contest Entry Period. Eligible song options for the Contest include the following:

CONSUMER DISCLOSURES: No purchase or donation necessary. Contest Entry Period ends at 11:59:59 PM UTC on November 11, 2019. Prizes: A total of six (6) prize packages of food for a holiday party, valued at $500 each, and six (6) round-trip Delta Airlines tickets to the continental United States from mainland Japan, valued at $1,300 each, will be awarded. Odds of winning depend on the number of eligible entries received during the Contest Entry Period. Administrator: USO Japan, Building B39A 2F, Fleet Activities Yokosuka, Japan. SELECTION OF WINNERS: Six (6) unit holiday food prize package winners will be selected from all eligible entries received during the Contest Entry Period. All eligible videos received by the Contest Entry Period deadline will be judged based on the following two (2) criteria and weighted percentages: (1) internal USO judging based on each video’s creativity (50%); and (2) internal USO judging based on the quality of singing voice talent and choreography within each video (50%).

The junior enlisted service members (rank of E-4 or below) within each winning unit will be entered into random drawings, and one (1) winner of a round-trip Delta Airlines ticket will be randomly selected from each of the six (6) winning units.

The selection of the six (6) winning units and the subsequent random drawings to determine the six (6) winning junior enlisted service members will be conducted on or about November 13, 2019, by the Administrator, whose decisions are final and binding in all matters relating to this Contest.

Winners will be notified by e-mail on or about November 15, 2019, and will be given instructions on how to claim the prize. If a potential prize winner does not respond to the winner notification message (message will be sent three (3) times over a seven (7) day period), or if said message is returned as undeliverable, or if an entrant is otherwise found to be ineligible, or if a selected winner cannot accept or receive the prize for any reason, the potential prize winner will forfeit the prize and an alternate winner will be selected. The Sponsor reserves the right to modify the notification procedures in connection with the selection of an alternate winner, if any. Prizes are non-transferable and no substitution by any winner or cash equivalent is allowed. Sponsor will not replace any lost, misplaced or stolen prizes. Sponsor reserves the right to substitute a prize with one of equal or greater value at its sole discretion. Prize winners are solely responsible for all local, state, and federal taxes and all expenses incurred in claiming their prize.

Each prize winner understands, acknowledges, and agrees that the prize winner is receiving a prize and will hereby release and discharge USO, its affiliates, any additional sponsors, and each of their respective employees, agents, officers, directors and legal representatives and assigns from any and all claims, liabilities, damages, losses or expenses arising from or caused by the award of such prize, including, but not limited to, the payment of any and all taxes that are due. Entry in the Contest and/or acceptance of a prize constitutes permission (except where prohibited by law) for USO to use each entrant’s or winner’s name, image, likeness, biographical information, hometown, and (if applicable) prize won, for marketing and promotional purposes, including, without limitation, in social media posts, without further compensation.

GENERAL: Entrants agree to these Official Rules and the decisions of the Administrator and the Sponsor, and on behalf of their respective heirs, executors, administrators, legal representatives, successors and assigns (collectively, “Releasing Parties”), release, defend and hold harmless the Contest Entities, as well as the employees, officers, directors and agents of each (collectively, “Released Parties”), from any and all actions, causes of action, suits, debts, dues, sums of money, accounts, reckonings, bonds, bills, specialties, covenants, contracts, controversies, agreements, promises, variances, trespasses, lost profits, indirect or direct damages, consequential damages, incidental damages, punitive or exemplary damages, judgments, executions, claims and demands whatsoever, in law, admiralty or equity, whether known or unknown, foreseen or unforeseen, against Released Parties which any one or more of the Releasing Parties ever had, now have or hereafter can, shall or may have, which in any way arise out of or result from entrant’s participation in the Contest, acceptance and/or use or misuse of any prize. In the event Sponsor is prevented from continuing with the Contest as contemplated herein by any event beyond its control, including but not limited to, fire, flood, hurricane, earthquake, explosion, labor dispute or strike, act of God or public enemy, satellite or equipment failure, riot or civil disturbance, terrorist threat or activity, war (declared or undeclared) or any federal, state, or local government law, order, or regulation, or order of any court or other cause not within Sponsor’s control or concerns regarding the safety of any entrant, Sponsor shall have the right to suspend or terminate the Contest. Sponsor reserves the right to change these Official Rules at any time, in its sole discretion.

Entrants assume all liability for any injury, including death or damage caused or claimed to be caused, by participation in this Contest or use or redemption of any prize. This Contest shall be governed by and interpreted under the laws of the District of Columbia, U.S.A., without giving effect to its conflicts of laws provisions. Entrants hereby agree that any and all disputes, claims, causes of action, or controversies (collectively, “Claims”) arising out of or in connection with this Contest shall be resolved, upon the election by entrant or Sponsor, by arbitration pursuant to this provision and the code of procedures of either the National Arbitration Forum (“NAF”) or the American Arbitration Association (“AAA”), as selected by the entrant. IF ARBITRATION IS CHOSEN BY ANY PARTY WITH RESPECT TO A CLAIM, NEITHER PARTY WILL HAVE THE RIGHT TO LITIGATE THAT CLAIM IN COURT OR HAVE A JURY TRIAL ON THAT CLAIM. FURTHER, NEITHER SPONSOR NOR ENTRANT WILL HAVE THE RIGHT TO PARTICIPATE IN A REPRESENTATIVE CAPACITY ON BEHALF OF THE GENERAL PUBLIC OR OTHER PERSONS SIMILARLY SITUATED, OR AS A MEMBER OF ANY CLASS OF CLAIMANTS PERTAINING TO ANY CLAIM SUBJECT TO ARBITRATION. EXCEPT AS SET FORTH BELOW, THE ARBITRATOR’S DECISION WILL BE FINAL AND BINDING. NOTE THAT OTHER RIGHTS THAT ENTRANT WOULD HAVE IF ENTRANT WENT TO COURT ALSO MAY NOT BE AVAILABLE IN ARBITRATION. The arbitrator’s authority to resolve Claims is limited to Claims between Sponsor and entrant alone, and the arbitrator’s authority to make awards is limited to awards to Sponsor and entrant alone. Furthermore, claims brought by either party against the other may not be joined or consolidated in arbitration with Claims brought by or against any third party, unless agreed to in writing by all parties. No arbitration award or decision will have any preclusive effect as to issues or claims in any dispute with anyone who is not a named party to the arbitration. Notwithstanding any other provision in this Agreement and without waiving either party’s right to appeal such decision, should any portion of this provision be deemed invalid or unenforceable, then the entire provision (other than this sentence) shall not apply. Sponsor is not responsible for any typographical or other error in the printing of the offer, administration of the Contest or in the announcement of prizes. Entry materials/data that have been tampered with or altered, or mass entries or entries generated by a script, macro or use of automated devices are void. The Sponsor is not responsible for: (i) lost, late, misdirected, damaged, or illegible entries; (ii) error, omission, interruption, deletion, defect, delay in operations or transmission, theft or destruction or unauthorized access to or alterations of entry materials, or for technical, network, telephone equipment, electronic, computer, hardware or software malfunctions of any kind, or inaccurate transmission of or failure to receive entry information by Sponsor on account of technical problems or traffic congestion on the Internet or at any web site or any combination thereof; (iii) any injury or damage to entrant’s or any other person’s computer related to or resulting from participating in the Contest, or (iv) the failure of any third party to comply with the instructions and proper administration of this Contest. By participating in the Contest, entrants (i) agree to be bound by these Official Rules, including all eligibility requirements, and (ii) agree to be bound by the decisions of Administrator, which are final and binding in all matters relating to the Contest. Failure to comply with these Official Rules may result in disqualification from the Contest. Sponsor reserves the right to: permanently disqualify from any contest it sponsors any person it believes has intentionally violated these Official Rules; and terminate the Contest if it becomes technically corrupted (including if a computer virus or system malfunction inalterably impairs its ability to conduct the Contest), or to select winners from among all eligible entries received prior to termination. LEGAL WARNING: ANY ATTEMPT BY AN INDIVIDUAL, WHETHER OR NOT AN ENTRANT, TO DELIBERATELY INTERFERE WITH THE OPERATION OF THE CONTEST, MAY CONSTITUTE A VIOLATION OF CRIMINAL & CIVIL LAWS AND SPONSOR RESERVES THE RIGHT TO SEEK DAMAGES AND DILIGENTLY PURSUE ALL REMEDIES AGAINST ANY SUCH INDIVIDUAL TO THE FULLEST EXTENT PERMITTED BY LAW.