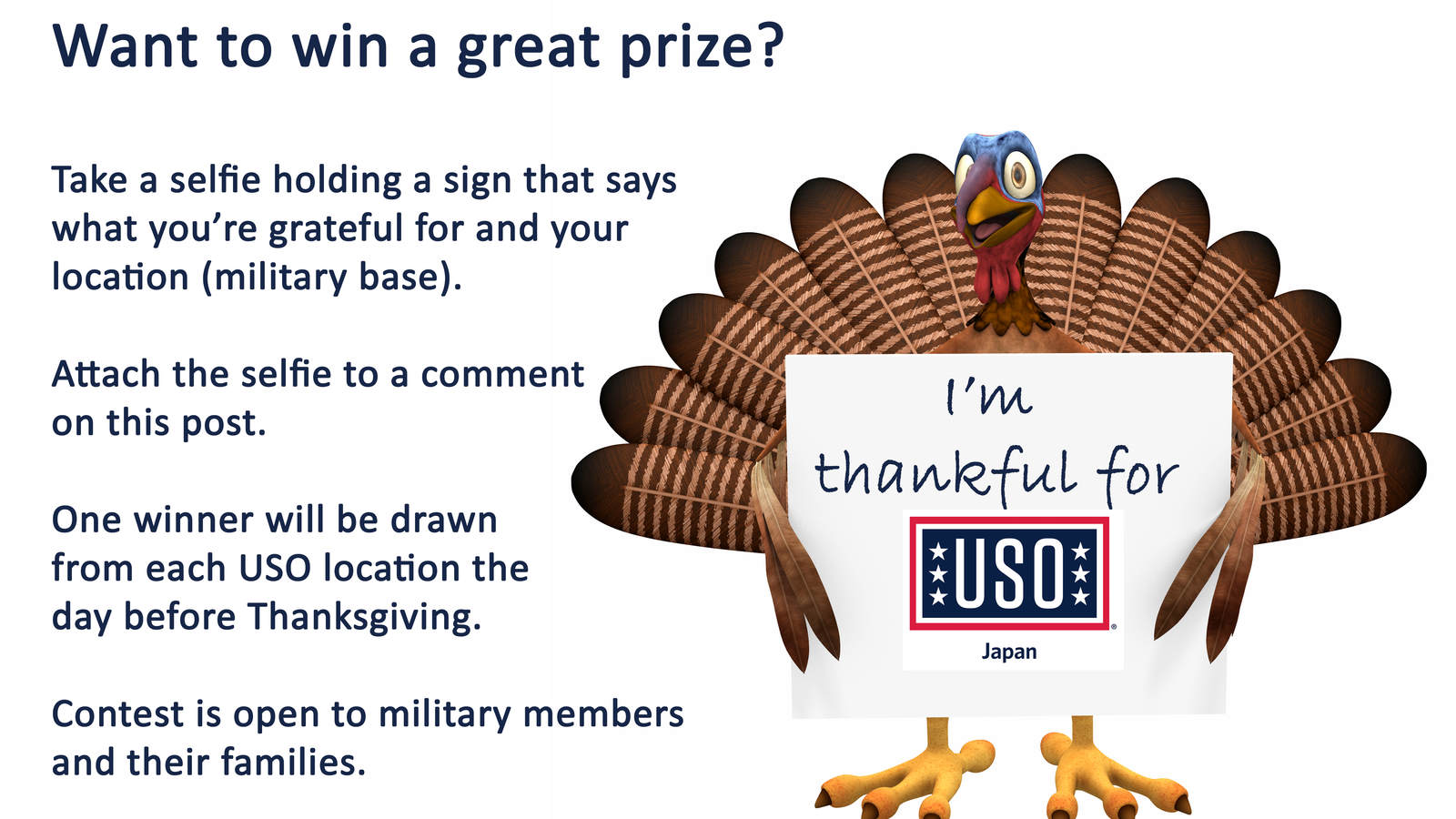 USO JAPAN THANKFUL SOCIAL MEDIA CONTEST 11/1/18-11/21/18 NO PURCHASE OR DONATION NECESSARY.  Enter for a chance to win one of 8 prizes, valued up to $170. Contest is open to all U.S. Military personnel on active duty and their families who are stationed on mainland Japan and age 18 or older at time of entry. See Official Rules for entry deadline and prize details.

ELIGIBILITY: Active duty United States military service members and their families who are stationed on mainland Japan and at least 18 years of age at the time of entry are eligible to win one of 8 prizes worth up to $170. Eight winners will be selected from all qualified entries by random drawing, with one winner being chosen from each USO center or outreach location. Employees of the United Service Organizations, Inc. (“USO,” the “Sponsor,” and the “Administrator”), and its affiliates, advertising and promotion agencies, retailers, and distributors (collectively, “Contest Entities”), and their immediate family members and/or those living within the same household of each are not eligible to enter or win. Contest is subject to all applicable federal, state, and local laws and regulations. Void where prohibited by law.

HOW TO ENTER: Visit https://www.facebook.com/USOMainlandJapan/ to submit a photo comment under the contest post. Photo must be of entrant holding a sign that says what they are thankful for, in addition to their base location. To qualify for the Contest’s random drawing, entries must be submitted within the Contest Entry Period.

CONSUMER DISCLOSURES: No purchase or donation necessary. Contest ends: 11:59:59 PM UTC on November 21, 2018. Prizes: A total of 8 prizes, varying in content, will be awarded. Prizes are valued at $170 per winner. Odds of winning depend on number of eligible entries received during the Contest Entry Period. Administrator: USO Japan, Building B39A 2F, Fleet Activities Yokosuka, Japan. SELECTION OF WINNERS: Winners will be determined in a random drawing from all eligible entries received during the Contest Entry Period. Random drawings will be conducted on or about November 21, 2018 by the Administrator, whose decisions are final and binding in all matters relating to this Contest. One winner will be chosen from each center and outreach location in Mainland Japan. Winners will be notified by e-mail on or about November 21, 2018, and will be given instructions on how to claim the Prize. If a potential prize winner does not respond to the winner notification message (message will be sent three (3) times over a seven (7) day period), or if said message is returned as undeliverable, or if an entrant is otherwise found to be ineligible, or if a selected winner cannot accept or receive the prize for any reason, the potential prize winner will forfeit the Prize and an alternate winner will be selected. The Sponsor reserves the right to modify the notification procedures in connection with the selection of an alternate winner, if any. Prizes are non-transferable and no substitution by any winner or cash equivalent is allowed. Sponsor will not replace any lost, misplaced or stolen prizes. Sponsor reserves the right to substitute a prize with one of equal or greater value at its sole discretion. Prize winners are solely responsible for all local, state, and federal taxes and all expenses incurred in claiming their prize. Each prize winner understands, acknowledges, and agrees that the prize winner is receiving a prize and will hereby release and discharge USO, its affiliates, any additional sponsors, and each of their respective employees, agents, officers, directors and legal representatives and assigns from any and all claims, liabilities, damages, losses or expenses arising from or caused by the award of such prize, including, but not limited to, the payment of any and all taxes that are due. Entry and acceptance of prize constitutes permission (except where prohibited by law) for USO to use each winner’s name, prize won, hometown, image, likeness, and biographical information for marketing and promotional purposes, including, without limitation, in social media posts, without further compensation.